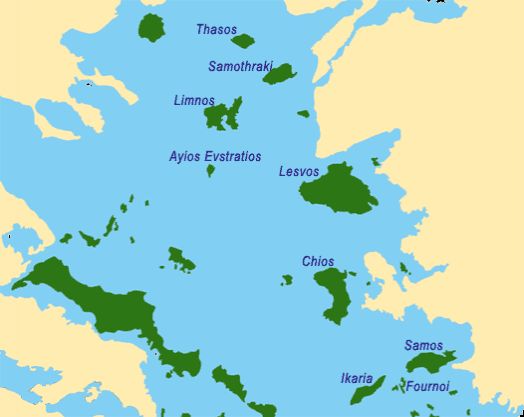 Thasos
Thasos is one of the best organised tourist islands. It combines the cool green of its trees spread all over, the golden colour of its beaches and the blue of its seas. Actually it is not a big island and it is very easy to go round it. Doing this round trip one comes across traditional villages, monasteries, sandy beaches and much more.

Thassos, famous in antiquity for its gold and marble, lies just off the coast of Eastern Macedonia (6km or 4miles). Its wooded mountain scenery, its creeks and bathing beaches as well as its excellent hotels make it a delightful island resort for holidays.The island which covers about 380 sq. km. is composed of marble and gray green gneiss.

The marble ridge of Mt. Ypsari rises out of the surrounding uplands to a height of 1003 m (3291 feet). Ample rainfall in autumn and winter sustains the luxuriant vegetation which clothes the landscape. There are several sorts of pine tree : sea pines, Aleppo pines and Corsican pines; also olives, walnut and even poplars.

Samothraki
One of the most historical islands, Samothraki is situated in the northeastern Aegean 29 nautical miles south of Alexandroupolis. The island is 180 square kilometers and has about 3000 inhabitants.

The island's very high mountain, Saos, is the most impressive sight, and the first thing that appears as your ship sails towards the island.

Limnos
One of the beautiful islands of the north eastern Aegean, Limnos is rich in history, beautiful golden coasts and products such as honey, wine, cheese and lots of fish.

Limnos is a volcanic island in the northeast Aegean. According to Homer, it was the island that Hephaistos- god of fire - protected and thought the inhabitants the art of working iron, an art that the Limnians still practice today.

One of the many archeological sites on the island is Ancient Hephaistia. The ruins of the city lie in northeastern Limnos. Hephaistia owes its name to the smith god, Hephaistos and was built during th 6th and 5th centuries BC.

On Cape Chloe stands the Sanctuary of the Cabeiroi. Here, special rites of occult character were celebrated, whose central theme was the regeneration of men and life : the famous Cabeiroi Mysteries.

Other important archeological sites, are Poliochni and the Temple of Artemis .

Myrina, the beautiful and hospitable capital, is dominated by its imposing hilltop castle. Old houses and mansions, narrow paved streets and tavernas are typical features of Myrina, and of Limnos as a whole.

The beaches of Romeikos Yalos, Richa Nera, Fanaraki and Havouli are among the best places to swim and relax, combining crystal clear sea, golden sand and delightful seaside tavernas. On the west side of the island is Therma, a spa set with medicinal waters.

Ayios Evstratios
A small unspoiled island with beautiful and picturesque sandy beaches, ideal for peaceful vacations close to nature and to warm and simple people.The island is 21 nautical miles south of Limnos and is 49 square kilometers in area. There are many caves in the uninhabited south part of the island creating a natural and ideal refuge for seals and other species of the sea world.

Lesvos
Lesvos, also known as Mytilini, is one of the four largest Greek islands. It is lying in the northeastern Aegean Sea across the coast of Asia Minor. The longest end of the island is 70km and the width reaches 45km. The land of Lesvos which comprises 1698 sq. km. is the result of volcanic eruptions and it is anomalous and stony with a lot of mineral water springs. The variety of its land (mountainous, flat, valley like etc.) creates a respective variety of landscapes with b contrasts such as the simple pleasantness of the eastern coasts and the wild mountainous magnificent landscape of Lepetymnos in the north, the abundantly wooded slopes of Agiassos and the forsaken loneliness of the geologically disturbed southwestern area around Sigri. Vast olive groves, dense pine forests, sandy beaches, monasteries and traditional houses compose the first impression that enchants the visitor. This is an island with a long history - homeland of Sappho the poetess, to Arion the guitar singer, to the musician Terpandros - which today continues its tradition by producing first - rate names in painting, poetry and literature.

Due to its mild and healthy climate with its temperate winter, its many rainfalls, its bright spring and sunny summer, Lesvos is a very productive island. The fishing industry is also very developed (Kalloni's salted sardines are famous). During the recent years tourism has become a major contribution in Lesvos economy.

The island with the beautiful beaches, the pinewoods, the citrus trees, the vineyards, the olive trees, the big impressive mansions, the medieval villages. Geographically Chios lies to the south of the island of Lesvos, north of the island of Samos, and 9 nautical miles from the western coast of the port of Tsesme in Turkey.

Samos
Samos is located in the south-east part of the Aegean Sea, opposite the coast of Asia Minor. Legend says that Samos was named after Sao, the son of Rinis and Mercury. Throughout the centuries, Samos has been known by several different names, including Parthenorousa, Kyparisia, Stefani and Driousa.

Samos today is a nice green island which attracts tourists from all over the world, not only for the nice and endless beaches but also because of the history which left its mark everywhere.

Every year, thousands of tourists visit Samos, not only for the endless beaches and the clear water bays but also because they have the opportunity to visit the monuments which exist all over the island and prove its glamour through the centuries.

Samos is one of the most important Hellenic islands. The monuments and the museums which bear witness to the history of the island and Hellas, together with the clean beaches, the traditional villages, the monasteries and the churches, not to mention the night life, comprise an island that one cannot afford not to visit.

Ikaria
Ikaria is an island with many beauties.The roofs of the houses, the sea where Ikaros drowned when the sun melted his wings of wax. Dionyssos was born In Ikaria, near Drepano. .The primitive beauty of the island, the kind people and the monuments will please those who decide to visit Ikaria.

Ikaria was named after Ikaros, the son of Daidalos. Ikaros escaped from the labirynth of Crete with his father using wings which were glued on his body with wax. While flying, Ikaros didn't pay attention to his father's advice and flew high towards the sun.The sun melted the wax that was holding the wings and Ikaros fell to the sea and drowned.