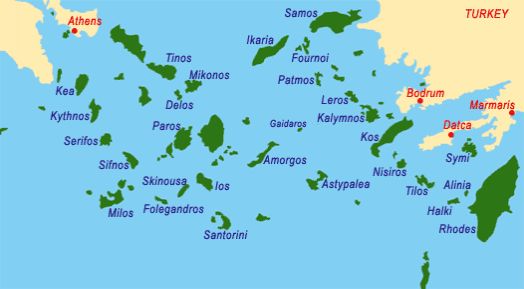 PLACES TO SEE IN DODECANESE

Kos
Home of the Hippocrates, the father of medicine, which is a large island full of contrasts. Rich in history, with many ancient ruins, as well as modern, lively towns, Kos is most enjoyable. Apart from the main, busy harbour, you can also visit Kamares, a more secluded cove.

Kardemena – This harbor lies on the SE coast of the island. It used to be a small fishing village but now has become a resort area. It provides good shelter from the meltemi, there is a pier to moor on to but at night due to the nightlife it can get a bit noisy. Fuel, water and provisioning are available.

Limin Kos - A fairly busy harbor as there are small boats that go back and forth from Turkey. During the meltemi it offers good shelter but it does tend to swell up. All facilities are available.

Masthari – This is a small fishing village on the NW coast of Kos. There is a new mole and offers good shelter from the meltemi.

Ormos Kamares – This small bay is located on the South end of the island. It offers good shelter from the meltemi and there is a small mole to moor on to. Water is also available at the mole as well as few tavernas.

Kalymnos
This island of barren rock sparsely strewn with herb and thyme bushes and green valleys, enjoys an abundance of golden beaches. Its fame is owed to its celebrated sponge fishermen, who leave their island each spring for the north coast of Africa amid sombre ceremonies, to return five months later greeted by joyous celebrations. The island's capital is a newly built town which hugs the hillside. The houses are painted white and blue and from a distance look like some child's drawing. An along the coast are inlets and bays. Caves are also an interesting attraction, with their stalactites and healing waters. It's an ideal island for the amateur fisherman, with transparent seas favouring underwriter fishing. From Kalymnos it is an easy jaunt to the nearby tiny islands of Telendos and Pserirnos, idyllic spots for fishing and swimming.

Limin Kalymnos - Offers good shelter form the meltemi. If there are strong southerly winds the harbor can become uncomfortable. There is both fuel and water on the quay. There is also good provisioning and a number of tavernas.

Vathi – Is a fjord which is extremely attractive with its lemon and orange groves. There is a mole you can anchor on to. The fjord offers good shelter from meltemi There are tavernas, water and some supplies available.

Ormiskos Vorio or Emobrios – A small bay with a T-pier which is usually occupied by the fishing boats, you can anchor off in the bay. There is a small taverna and offers fair shelter from the meltemi.

Vlikathia – A small bay with beautiful summer villas. There is a taverna ashore and offers good shelter from the meltemi.

Samos
Samos is located in the south-east part of the Aegean Sea, opposite the coast of Asia Minor. Legend says that Samos was named after Sao, the son of Rinis and Mercury. Throughout the centuries, Samos has been known by several different names, including Parthenorousa, Kyparisia, Stefani and Driousa.

Samos today is a nice green island which attracts tourists from all over the world, not only for the nice and endless beaches but also because of the history which left its mark everywhere.

Every year, thousands of tourists visit Samos, not only for the endless beaches and the clear water bays but also because they have the opportunity to visit the monuments which exist all over the island and prove its glamour through the centuries.

Samos is one of the most important Hellenic islands. The monuments and the museums which bear witness to the history of the island and Hellas, together with the clean beaches, the traditional villages, the monasteries and the churches, not to mention the night life, comprise an island that one cannot afford not to visit.

Patmos
Patmos is located on the eastern part of the Aegean sea.The journey to the holy island from the island Samos is extremely short and there are daily routes by boats, flying dolfins and ships.

The port of Patmos is called Skala. On the top of the cliff is the beautiful Chora, the capital of the island with white houses and narrow roads overlooking the whole Aegean. In the middle of this landscape, dominates the enormous Byzantine monastery of St. John Theologos which was built in 1088.

In the monastery's safe there are byzantine icons, jewellery and emperor's presents, while in the library there are 3000 books and rare manuscripts. On the route between Skala and Chora is the Cave of the Apocalypse. It's a 17th century monastery which was built around the cave in which St. John wrote the book of Revelations.

Leros
The island of Leros belongs to the Dodekanise, on the southern edge of the Aegean.The sea sculped the coastline of Leros with lavish artistry giving it lacy shores, sandy beaches, protected harboursand amultitude of little islands allaround it. Nature there has been endowed with lush vegetation and landscape of pleasant alterations. History has played an important role on the island since ancient times. The people who have lived there have shown it

respect and built monasteries, churches and mansions in a unique architectural style. Today Leros gives the impression of being one of the last little paradises.

At the beatiful, organised beaches of Agia Marina, Alinda, Krithoni, Panteli, Vromolithos, Xerokampos and Laki one can enjoy all swimming activities as well as relaxing .

Nisiros
An extinct volcanic crater. The island itself is almost square . The soil is very rich therefor the island is rich in vegetation. Take a walk up to the crater which spans 2 ½ miles across. The view is spectacular.

Mandraki – The main harbor of Nisiros there is mole and quay to tie onto. During high meltemi winds the harbor can become uncomfortable and even dangerous. Provisioning is available and several tavernas.

Palon - This harbor lies 2 miles E of Mandraki. There is a mole to tie on and it offers good shelter form the meltemi. Make sure to eat some fresh fish at one of the many tavernas. There is also a mini market for provisioning.

Halki
Halki is one of the smallest islands in the Dodecanese. It is a mountainous, rocky island with excellent shores and numerous caves. Its stone houses are built amphitheatrically on mount Maistros (593 m), the island's highest peak. Its climate is very healthy, as it is mild both in winter and in summer. The winds can be very strong sometimes though and the sea can get stormy. It has a population of about 350 inhabitants, which are mostly stock-breeders and fishermen. Halki produces various stock-breeding products and fresh fish catches are served in every taverna. The inhabitants are simple, jolly, and warm-hearted people. In recent years, the island has been proclaimed an international meeting centre for young people. A municipal guest house has been built for this purpose. The locals approve of this movement and contribute the best they can to its preservation and further development.

Rhodes
Rhodes is the furthest south eastern island of Greece. it is a very popular, cosmopolitan island, where both Venetian and Turkish influence are apparent, giving it a special charm. Apart from the main harbour of Rhodes, where the magnificent statue of the Colossus once stood, you will find many picturesque, little coves, where you can swim in magical surroundings.

Mandraki - The main harbour of Rhodes. You cab tie on the N or the N end of the E quay. You will find the harbour can be fairly crowded and there is often four boats out from the quay. The harbour offers good shelter from prevailing winds. There is water and electricity available at the quay as well as fuel. All provisions can be found.

Lindos – You can moor where convenient in this large bay. The water is turquoise and offers an excellent area for a swim. Take the time to go ashore to visit the acropolis it is well worth the visit.

Symi
This rocky, mountainous island, north west of Rhodes, is one of the most beautiful of the Dodecanese. Here, mast of the inhabitants live off sponge diving. The main part is Gialos. Other interesting villages include Nimborios, Marthoundas, Pedi and Panormos. Enjoy swimming in the clear waters of Symi, but don't forget to taste the excellent wine, honey, almonds and olives produced here.

Tilos
The small island which is situated between Nisiros and Khalki is not visited by many tourists. During medieval the island was used to signal the island of Rhodes of approaching enemies.

Tilos has been one of the best-kept secrets in the Dodecanese for some time, with good unspoiled beaches, friendly people and wonderful walking country: a tranquil antidote to Kos town. From a distance it looks arid but it shelters groves of figs, almonds, walnuts, pomegranates and olives, all watered by fresh springs.

Ormos Livadhi – Located on the East coast of Tilos the large bay has a small quay. During the meltemi there can be a swell into the bay. Water and provisioning are available and there are number of tavernas.

Astypalea
Astypalea is the bridge which connects the Cyclades to the Dodecanese. On this island of the Dodecanese, one can encounter the special features which characterize both island groups.

Because of the abundant, fragrant flowers, her fruit, the Ancient Greeks called her the "Paradise of the Gods". Today, Astypalea is also famous for her exceptional honey and the high quality of fish.

Chora, one of the most beautiful towns in the Aegean, is outlined by numberless capes, thickets and sandy bays, tranquil, comely mountains seething with 365 picturesque churches and monasteries. A Venetian Castle stands proudly at the top of the town.

Other settlements that exist today are Livadi, Analypsi, Maltezana but, most of the island life is concentrated in Chora.

One of the best beaches the island has to offer is Steno, which divides the island in two. Other magestic beaches are Agios Konstantinos, Livadi, Schinontas, Maltezana, Marmaria and Plakes as well.